"It's your birthday Charlie Brown". We know the real Charlie Browns and we celebrate Charlie Brown III's birthday today. Charlie was named after his dad, Charles, Jr., who was named after his dad, Charles, Sr., our Popo, who was born long before the cartoon character was created. What a special day, some ?? years ago, when our first born soon came into the world, on a snowy November evening, actually the first snow fall, in Chicago that year. We always knew when they were bringing him to my room from the nursery---all the other babies had these high pitched cries but then there was Charlie Brown, with an almost baritone sounding Bwah, bwah, bwah. Charlie was always on the go as a child---he loved life and everything in it and still does. Bless his heart, he became an older brother to three more brothers in less than six years. Yes, we had four sons under the age of 5 3/4 years old.

There was never a dull moment when Charlie was around and he never met a stranger--everyone he met became a friend pretty quick. Not sure if Charlie was the one who started this tradition, but he always managed to show his brothers how to blow up their match box cars with firecrackers or smash them in the "hammer to the car" derby. They had wonderful times running through the orange groves behind our house, in Florida,  having great days of who can hit the hardest and furthest with oranges. They came back home with bruises all over the bodies, guess this was the sign of "manhood" back in those days.

Charlie is a friend to so many-- loyal, faithful and true--always there for you!! He is such a "people person" and still to this day, he never meets a stranger. 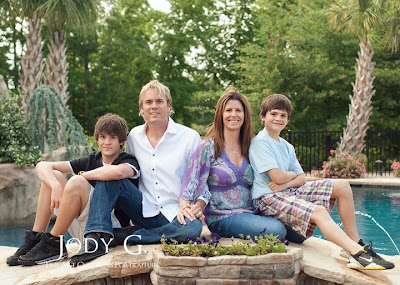 Charlie met Heather and they were married in February of 1994 and since then they've had two wonderful sons, our grandsons, Conlan and Keegan. Charlie is a awesome husband and a fantastic father--always involved in the boys activities and their lives in general and  right there supporting Heather in her activities and goals. They have traveled the world together as a family and have seen things that you cannot learn in a classroom or by reading it in a newspaper or book. While they were living in Hong Kong, they gave us the gift of a lifetime, they brought us over there to spend three weeks with them. Also planned special side trips to Thailand, China and Cambodia for us. We spent Easter that year in Phuket, Thailand with the four of them, then they planned a trip to Bejing, China, for just Charles and I, with our own guide each day to show us the sights and share the history of this country, absolutely amazing.Then back to Hong Kong for a few days, in between, before we headed out with Charlie, Heather, Charles and myself, to Cambodia. We had the joy of being in Siem Reap, Cambodia, an amazing country to visit and see history unfold right before our eyes, with the restoring of Angkor Wat--a city that was literally covered with jungle, vines and land mines, from the war, until recent years. And the incredible opportunity to experience first hand the "floating village" where people are born, live, work, go to school, shop, go to a medical clinic or church and die on these dug out boats, all floating on this river. THESE MEMORIES WILL LAST A LIFETIME WITH US. 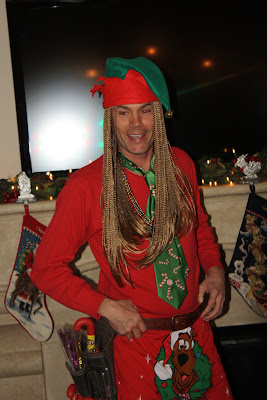 Now, for the side of Charlie that you all are waiting to see and hear about, although we are sure that his reputation has well preceded those who know him. Charlie has an uncanny ability to draw people into uncontrollable laughter until the tears roll down your cheeks and you hurt all over from his actions, expressions, multiple voice changes and on and on. We are attaching a couple of pictures from last Christmas that we think will explain it all. "Santa's Elf in Action". Our Charlie Brown, one of a kind!! 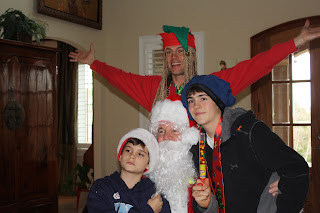 Charlie Brown III, we celebrate your life today and we are so proud of you and the man that you have become, with a heart of caring, loving and giving that the Lord has blessed you with abundantly. We could not ask for more.
We love you all the birthdays in the whole world, Mama Lou and Buddy Roe, a.k.a. Mom and Dad

Posted by Lynne of Butterfly Creek Pottery at 8:37 AM