Today is a very special day for our daughter-in-love, Kara, she is celebrating her birthday. Seems like Kara's has been in our family since we first moved to Lincolnton, I guess that is because she has. When we came to Lincolnton in  December of 1984, Rob, our second born son, was in Dorcas Taylor's math class helping out and Dorcas said to Rob "do you see that girl over there, pointing to a beautiful young lady sitting over there, you are going to marry her one day". And guess what he did and that beautiful lady was Kara Gates, now Kara Gates Brown. So Dorcas's match making days had just begun but she was right on target with this one. Kara learned allot about the Brown family early on. One day, she and Rob were away somewhere when a friend delivered a pickup truck of hull corn to our door step. We called Rob to come help shuck "some" corn and Kara came right along with him and stayed until the last cob was done. (Complete with worm after worm and "Eke after Eke") What a trooper she was, she just fit right in. "Bless her heart", I don't think that she had any idea what she was getting into.

Kara is an incredible wife, mother, daughter, sister, daughter-in-love, aunt, niece and friend. She has a gentle spirit and such a tender heart. She loves the Lord and serves so faithful whenever and wherever she is needed at church. When she gets involved, she is whole-heartily involved. Loyal and faithful could be her second middle name--she is a friend is "sticks closer than a sister". She rejoices with those who rejoice and weeps with those who weep--genuine gifts from the Lord in her life. What a joy it has been to watch her grown in the mercies and grace of the Lord in her life. 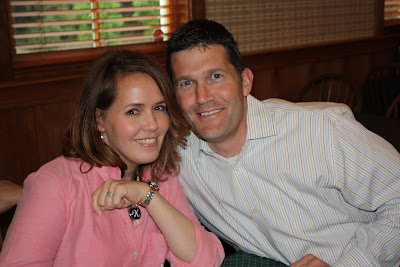 She is so supportive of Rob in his endeavors as an attorney and with all of his civic and church activities and his commitment to the Lord and His people. She loves and encourages, Elizabeth and Emery and is always there for them during their happy days and their tough days. She sees the good in people where others may fail to even look for even a speck of good. She wants people to succeed and become all that the Lord has for them. In recent years, she took a job outside the home and has done so, so well at it, she puts her whole self into what she is doing. She is a definitely a "people person" and no one who meets Kara ever walks away as a stranger. 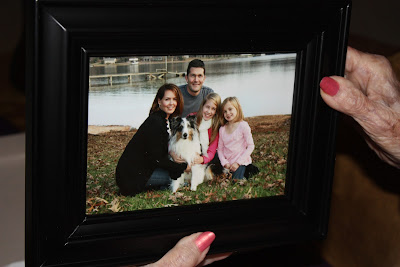 This is picture of our Memo, Rob's 97 year old grandmother holding the picture of Rob, Kara, Elizabeth, Emery and family dog Scout that they gave Memo this past Christmas.
She so treasured her family. On February 05, 2012, just 42 days later Memo was in the presence of her precious Lord. This is what our Kara is all about loving family, loving friends and loving her Lord. A blessed birthday to a very special daughter-in-love, Kara. May this coming year have your cup filled to overflowing with the joy, mercy, grace, peace, love, blessing and abundance of the Lord's presence.

We love you dearly, Charles and Lynne
Posted by Lynne of Butterfly Creek Pottery at 3:06 PM 1 comments