OUR RANDY CELEBRATES HIS BIRTHDAY TODAY

Our Randy celebrates his birthday today and we wanted to share some special things about him with you all. He is our fourth born son and the other boys always said we spoiled him. Actually, they had a great part in that as well, he never lacked for their attention. We had four sons in 5 1/2 years, so they were super close and were and are great friends as well as brothers. Then the Lord brought our Angie into our lives when Randy was 9 years old, so he was no longer the youngest in the family. And now the four became five!!

We are so proud of the man that Randy has become. He is an incredible husband to Angela and an amazing father to Aniston. The two sweethearts in his life. Angela works
week-ends as a RN, so Randy took on the diaper change and feeding duties plus everything else, every week-end since Aniston was about six weeks old and still does (she will be 4 years old in December). One of the things they love to do on Saturdays together, is go through the Chick-Fal A, drive thru, and have a "picnic" in a park or a "picnic" in the back seat of the truck. Don't you know that you can picnic anywhere that there are a father and a daughter who love just being together. Such as special tradition, along with so many others. They also love going out on the jet ski together, pictured below, with Aniston yelling "faster Daddy faster". He loves Angela so deeply and always wants the best for her. He has a wonderfully creative mind, a very special gift from the Lord. He is real perfectionist and has built some fantastic pieces and done so many creative things for their townhouse. He works until he gets it "just right". I do believe that you could eat off of his garage floor. 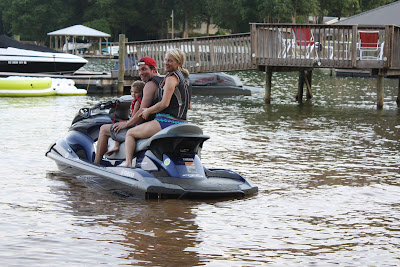 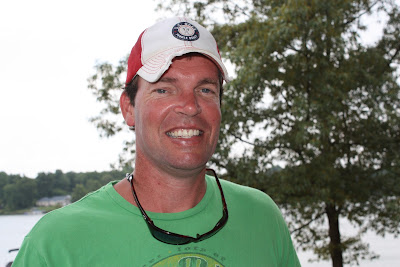 Randy has always been a champion of the underdog. He never likes for anyone to be mistreated or looked down on--so he developed this very special heart of compassion and caring for people. He is very observant along with an amazing gift of discernment. He is fairly quiet around people but takes in more than you can imagine in a matter of minutes.
If you ever want a friend, Randy is  one of the most loyal ones that you could ask for--he never gives up on anyone. He is real encourager and supporter. He is hard worker and keeps at a task until he sees it through. He is an outstanding athlete, it just seems to come natural for him.
We do want to add a very special member of their family, Gunnar, their silver Lab--he is so devoted to Randy (Angela and now Aniston). Gunnar has separation anxiety when he is away from Randy and is a very special part of the Randy Brown Family. 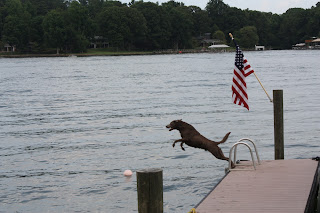 This is a picture of Gunnar, jumping off the dock at the lake house to try and follow Randy on the jet ski--he would just about drown if we did not call him and make him come back. Loyal, faithful, buddy friend!!!

As we said in the beginning of this post, we are so proud to call him our son, he is precious  treasure in our hearts and we are
so grateful he belongs to us.

We love you dearly Randy and ask the Lord's richest blessing, provision, mercy, grace and love on all the years ahead of you. Always Mom and Dad
Posted by Lynne of Butterfly Creek Pottery at 12:43 PM